Walking around the suburbs of Melbourne, you tend to find a hodgepodge of homes from different eras. Some home designs incorporate pillars and turrets, some have bay windows, and some are modest, brick bungalows sitting amidst their leafy garden oases. There’s a lot of variety and with that a lot to admire too.

This is what got me thinking if there is any real definition to the term ‘Australian architecture’. That is aside from our environmental adaptations to typically European or American designs. Since our colonial era, Australia has been shaped by a number of external influences. Our neighbourhoods have essentially become monuments to all these different influences. Even walking through a Melbourne bathroom shop will have you exposed to at least five or six different eras in interior design and architecture. These things have made traditional ‘Australian’ homes one of the sought-after housing options across the state.

If you’re looking to buy one of these homes in Melbourne, you should also check out what resources are available to you as a homebuyer. For example, the Australian and States Governments have introduced a range of grants and incentives for first-home buyers to help people get their foot in the property market. For a list of specific Victorian Government grants, check out this great resource by Joust.

Read on for a brief overview of all of Melbourne’s most iconic architectural styles and where you’ll be most likely to find them.

What are Victorian-style homes? 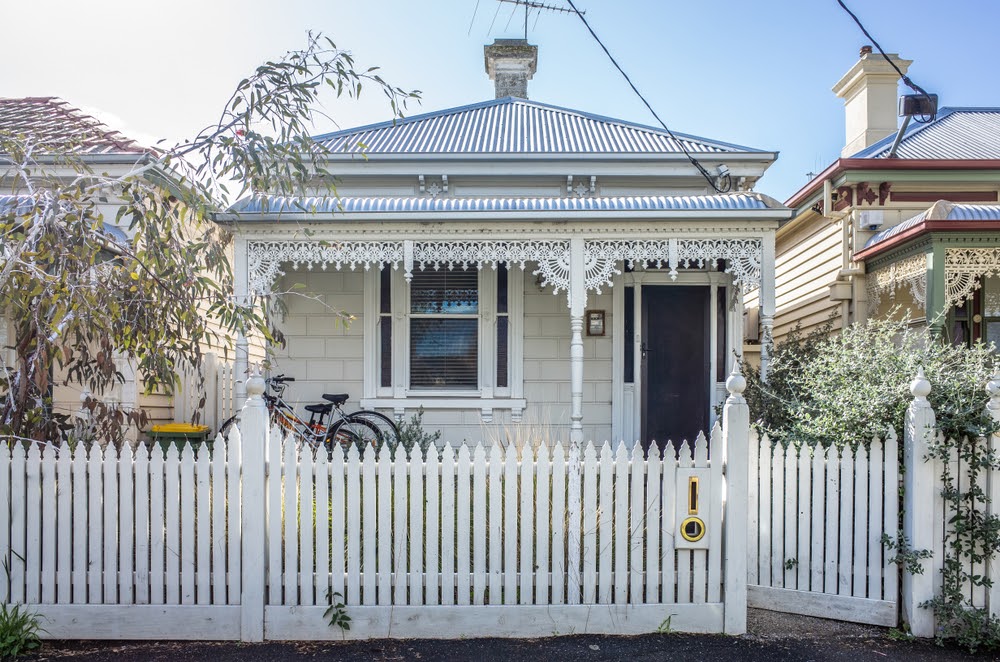 Victorian-style terrace housing makes up most of the real estate in and around the city of Melbourne, with many houses in Carlton and Fitzroy boasting these gorgeous terrace exteriors, although some of these older homes can be real fixer-uppers too.

Victorian architecture is generally considered to be composed over three distinct periods – early, mid, and late – all of which incorporated their own stylistic elements. If you’re lucky enough to call a Victorian-era house your home, you can easily identify which period of time your home may have been built in by the materials used and the appearance of your walling and interiors.

Early-Victorian homes (built prior to 1806) tend to be more modest and basic in their design than their later counterparts. These homes aren’t likely to incorporate any ornamental brickwork or coiffed ceilings but are inclined to have detailed wainscoting or moulded skirting boards and ‘architraves’, or door frames.

Mid-Victorian homes (built from 1860-1875) have all of this as well as coiffed ceilings, enclosed front yard spaces with picket fencing, and stained glass windows for decoration. Moving into late Victorian homes (built from 1875-1901), we see even more ornate interiors that can often be boldly coloured to match even more dynamic facades, built with elements like parapets, arches, and pillars in a Greco-Roman style.

Even if your Victorian home was built after 1901, chances are that it was built with a particular period in mind. If your home has been renovated at all and may have experienced some superficial changes, not worry. The devil is in the detail when it comes to Victorian-era homes. 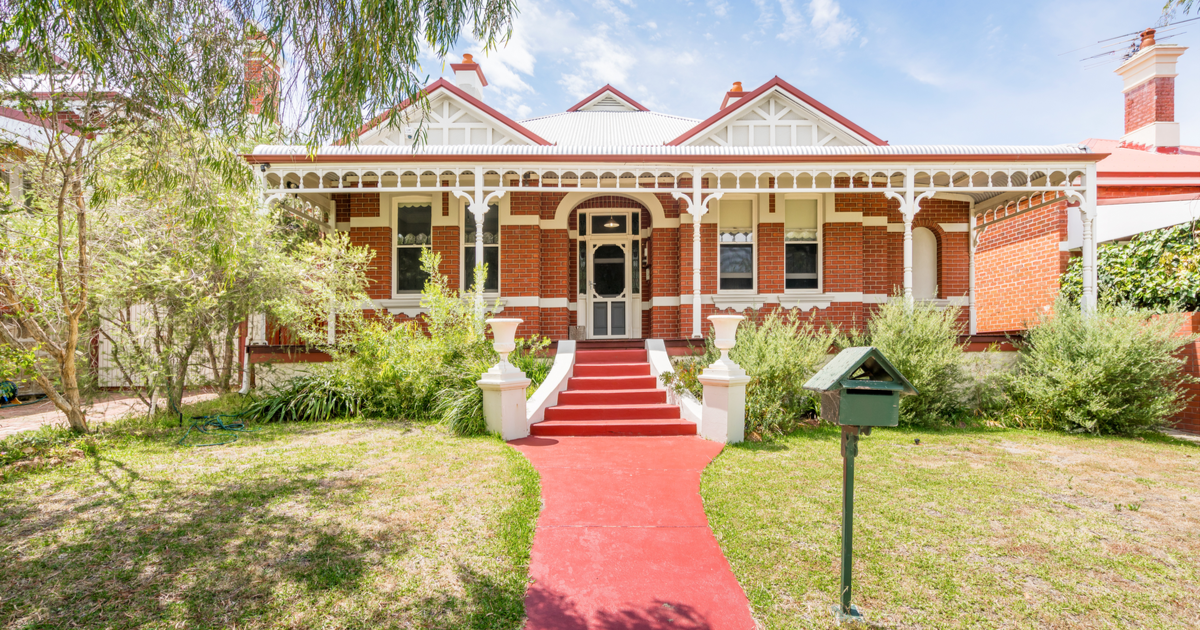 Federation-style homes (also known as ‘Edwardian’ homes outside of Australia) make up a lot of Melbourne’s inner-city suburbs, spanning across the Yarra, Darebin, Boroondara, and Port Phillip council districts in particular. This architectural style was developed between the years 1901 to 1910, during the reign of King Edward VIII and prior to World War I.

As the late Victorian style preceded the Edwardian school of design, Federation homes can be identified by their similar characteristics to ornate Victorian houses. They share brick exteriors, stained glass windows, ornate moulding and tilework, as well as being built in the wholly European fashion of using slated or terra cotta tiled roofing. So how is this style different from the Victorian style?

Unlike Victorian-era homes, Federation-style houses possess generally fresher interiors and make better use of their vertical space, which means wider staircases and potentially even second-floor landings. Federation-style homes also tend to be more adaptable, which is why a fair amount of them have undergone renovations with minimal fuss. It is indeed rare to find a Federation home that’s been maintained in its original state in Melbourne. 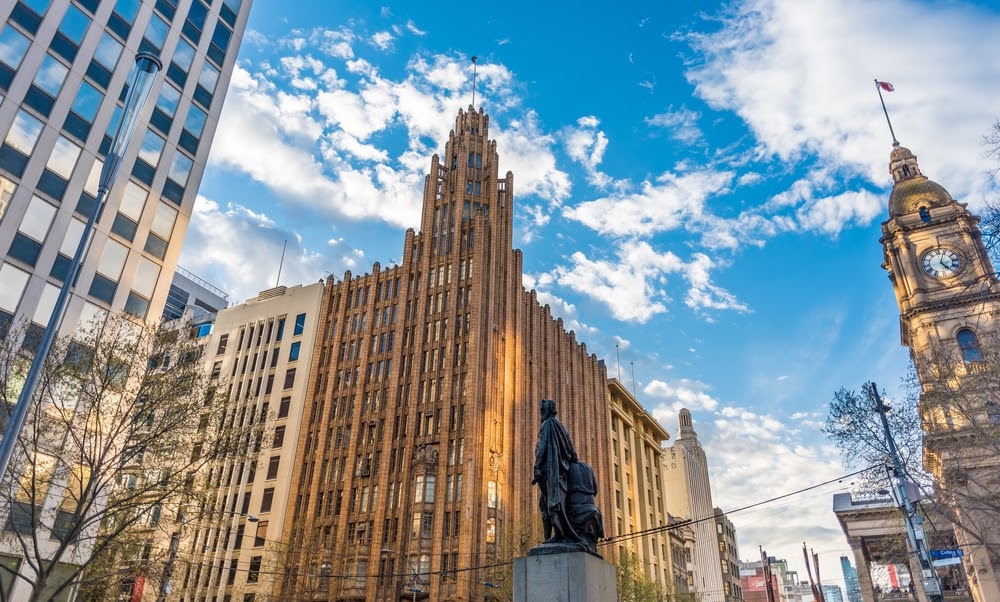 Art Deco has been lauded as one of the loudest and dynamic design styles to ever be founded. In the world of architecture, art deco structures can be identified by their often ostentatious geometric facades, primarily built using particularly unostentatious or I suppose ‘modest’ man-made materials like brick, glass, and concrete. This disparity between the bold, geometric shapes created and the homely materials used to create them, is reflective of the post-World War I desire for prosperity and luxury with a sense of caution, as the Western world bounces back from the uncertainties and scarcities inspired by global conflict.

In essence, art deco is a celebration of human accomplishment, which is why every art deco skyscraper that dots the Melbourne skyline looks kind of like a firework that’s perpetually about to explode against the sunset. There’s really nothing like Art Deco against a good old Australian sunset.

What is Australian Post-War Housing? 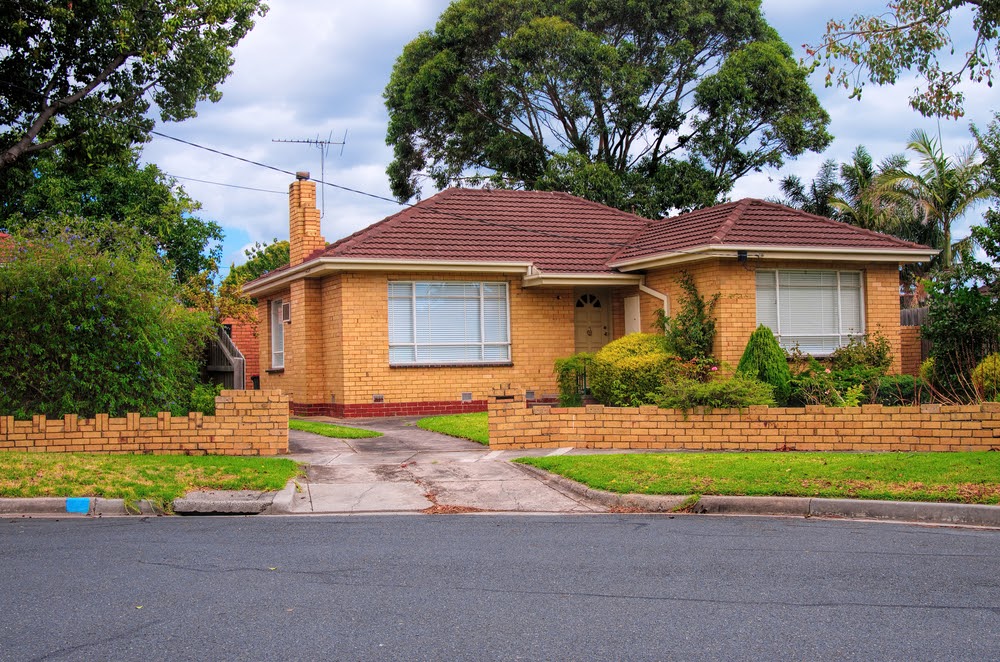 So we had a little taste of sustainable opulence with the emergence of art deco architecture, but following World War II, we had to take a brief return to modest architectural design to keep up with Australia’s post-war population boom.

Following the Second World War, Australia experienced its first-ever period of mass immigration, with European migrants arriving at Princes Pier prior to but predominantly during the ‘50s. A lot of these migrant families settled in Melbourne’s outer suburbs in regions across the Moreland, Darebin, and Whittlesea council districts. As you drive around these regions, you’ll see similar kinds of modest, single-storey brick houses, all with uniform colour schemes, and practical squarish layouts to support open-plan living. This era of post-war home design was all about encouraging land ownership for family units across Melbourne’s outer suburbs.

Alongside their highly practical design, these homes were also built with locally sourced materials like brick and terra cotta shingles, and the building of these truly Australian homes was a bolster to the country’s national economy following the unprecedented growth of Australia’s population at that time. 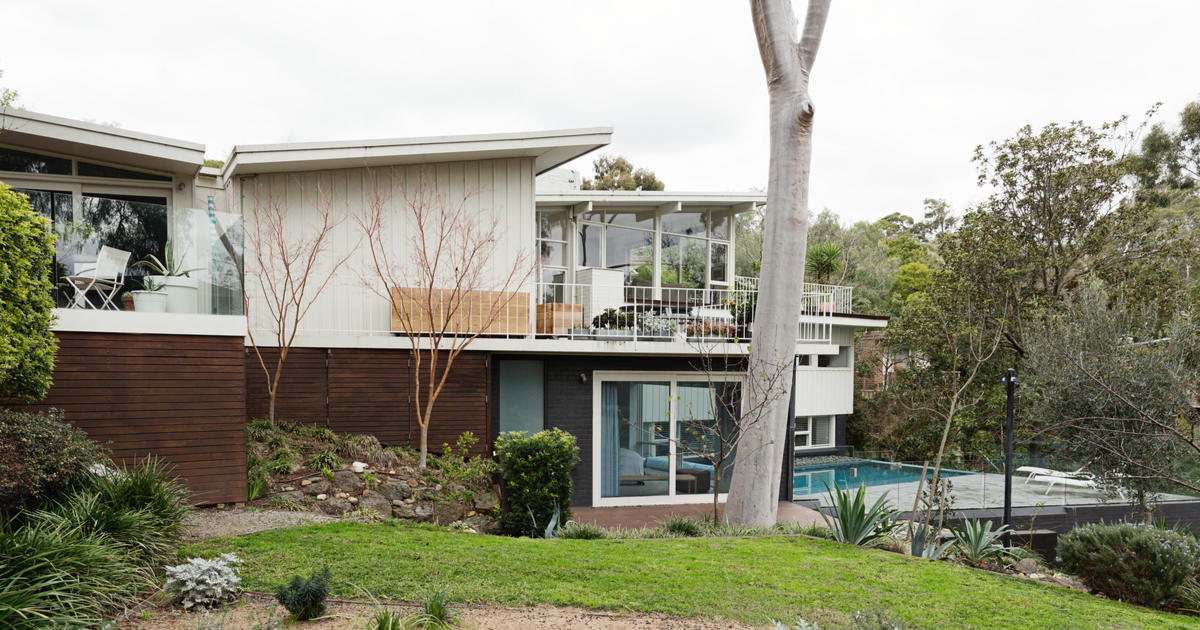 The mid-century modernist design saw a return to and subsequent evolution of some of art deco’s most beloved elements, including but not limited to art deco’s love for curvature in its facades. Mid-century modernism was all about creating fresh, airy structures, that invites the natural world in just as much as it keeps it out. This means large floor-to-ceiling windows, and balconies and porches that aren’t so much attached to the house as they are harmoniously both a part of the house and of the wider landscape. It’s all about blurring the lines between the natural and manmade worlds.

You can find a lot of mid-century modernist homes dotting the coastline of greater Melbourne, as this design style is popularly used for designing beachside properties. 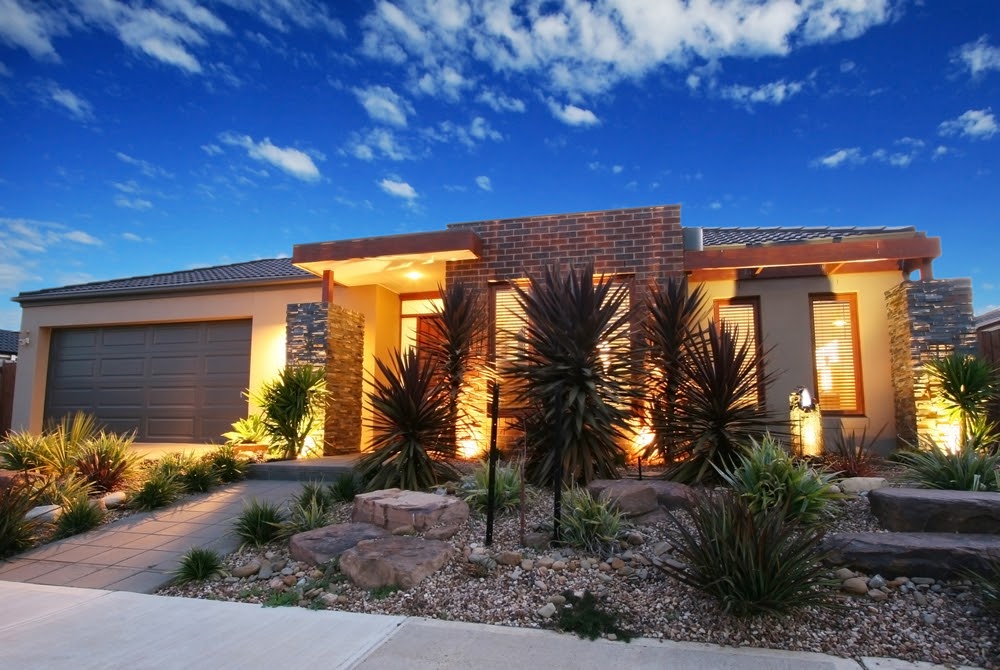 Finally, we come to contemporary modern home design, a design style that we’ll know all too well considering it has been embraced by building companies across Australia. Like mid-century modernism, contemporary modernism aims to incorporate elements of the natural world in its design. Whilst contemporary modern homes look a little like post-war homes with a twenty-first-century twist, their interiors feel a lot more like mid-century modernist interiors, with a focus on natural light availability, and sparsely decorated open-plan layouts. It’s also common to see these homes designed with drought-tolerant garden spaces.

With the rate at which the greater city of Melbourne is expanding, chances are high you may be experiencing some level of fatigue when it comes to looking at contemporary modern home designs. Rest assured, however, that contemporary modern homes are designed to feel a little like a blank canvas so that you can style them however you like whilst still being able to enjoy all the most modern fixtures, wiring, and plumbing.

But before getting the most out of the benefits of buying a traditional ‘Australian’ home, you may have to deal with the buying process. Unfortunately, purchasing a property isn’t easy as it seems, especially if there’s paperwork to prepare to facilitate the transfer of ownership title. This process is called conveyancing. Before you assume full ownership of the property you’ve purchased, you need to work on the actual transfer of the property’s title from the seller.

However, unless you’re familiar with the process, you may need licensed professionals who specialize in conveyancing Brisbane because they’ll be the ones to prepare, verify, and lodge the necessary legal documents to complete the transfer of ownership. Thus, when looking for conveyancers in your area, make sure to consider some essential factors. For instance, check their experience, regulatory status, quality of service, and pricing. You can get more information about your prospects by visiting their websites, contacting references, and reading some reviews online.

As you can see, the style of housing in Melbourne can vary from place to place, and our relationship with architecture generally tends to mirror our social, cultural, and economic climates. It will be interesting to see just how the city evolves over the next few decades.

Because of this evolution, many people have become interested in buying Melbourne housing options due to their architectural designs and aesthetic appeal.

So, if you’re looking for a traditional ‘Australian’ home, keep the information mentioned above in mind to familiarize yourself with the available options and make the buying process a seamless one.

Things To Do in Ballarat

Are You Injured From Working At Home? A...

Are Hamsters Illegal in Australia?

Things to do in Lorne, Victoria with kids

How to Make Healthy Eating Fun for You...

How to Teach Your Children About Money

The Pros And Cons Of Family-Friendly Restaurants