Paddy is possibly the most intense Google reviewer in Melbourne. Maybe even the world.

Paddy is a man on a Google review rampage. By the looks of it Paddy is possessed by a Google Map demon. The Google map demon looks like he has made Paddy leave a review to every possible location he has been to or been in the vicinity of. Possibly against his will. There is no stopping Paddy now. The Google Map demon has him deeply possessed. This is the only possible explanation for someone to have written close to 400 reviews in what looks like 2 years.

Kmart Narre Warren the home of man-haters and creepy Debbie.

Seriously when has someone ever memorised a security guards name? Paddy are you sure you’re not the creepy one here? 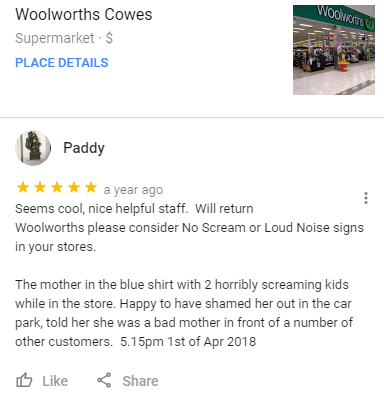 Yes, “no screaming” signs will make kids stop screaming. Good job Paddy. Nice suggestion. Maybe they need a sign to tell men to leave women alone in the car park. While we’re at it how about a “don’t tell other people how to parent” sign.

Maybe shes only in a bad mood because the moody Google review guy is reading her name tag again.

We all know only ugly people start fights in clubs. 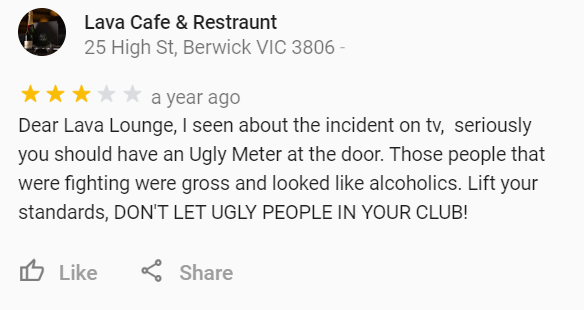 Maybe if Paddy was there with his ugly meter this would not have happened. 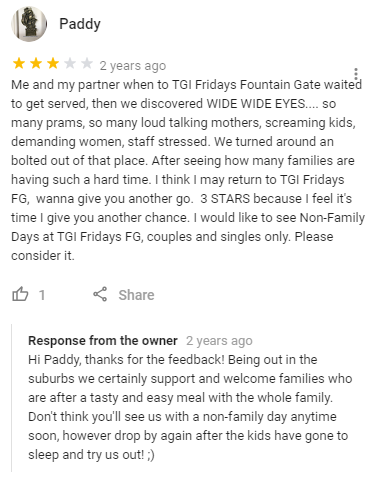 Paddy thinks TGI’s is a 5-star restaurant but instead he gave it 3 stars on Google.

According to Paddy if families want to eat a meal together maybe they should just stay at home.

Don’t you hate it when women don’t want men to shop at Target? 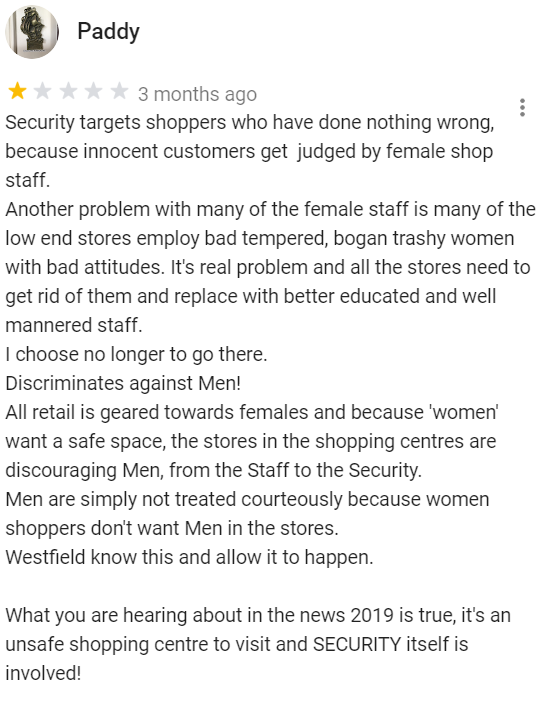 Apprently women don’t like men shopping in stores. I was not aware of this. Lucky Paddy has saved me by letting me know.

Imagine building up a business and getting a bad review because Paddy drove past. 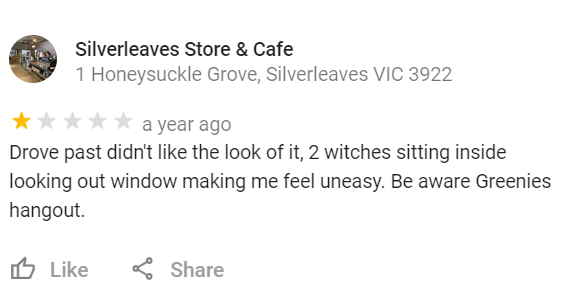 Paddy this is not Silverleaves fault please leave them alone.

Paddy, I think you’re confused. Why do you think women hate men? 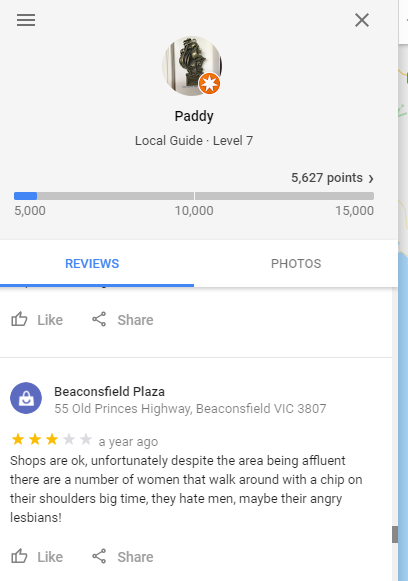 I think you’re the one with a chip on your shoulder about women Paddy.

Why did you do this Paddy?

Let me guess, another security woman?

I can’t tell if he is happy or upset with Belinda or what she did.

Yes, Paddy, we know! All women are male hating feminists

I don’t know if the Melbourne Symphony orchestra deserved this Paddy.

Parliament house only gets 5 stars when you fart in it 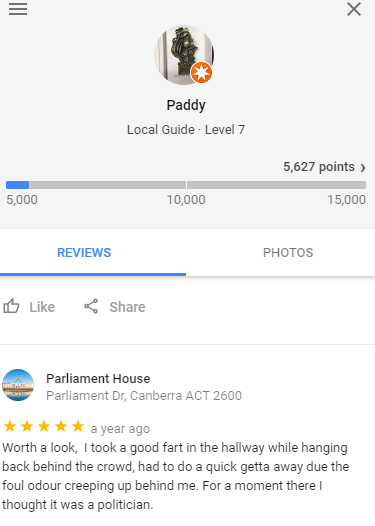 It’s okay Paddy she might not even work there any more. If she does I’m sure she hasn’t been holding a grudge as long as you have. 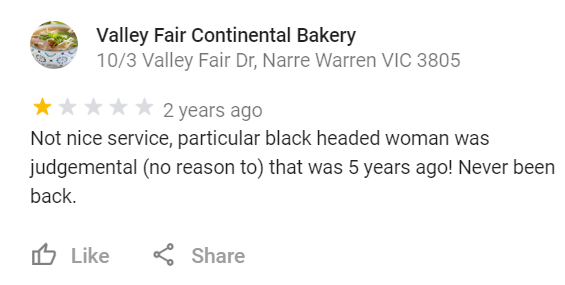 Paddy only seems to argue with women. Maybe Paddy would prefer it if Valley Fair only hired men.

How dare those doctors take you in for further tests! Outrageous.

Oh no! how will Paddy shop at Chadstone? We all know women hate male shoppers

Don’t go to target it is full of bad mothers who hate male shoppers.

More of Paddy against the bad mothers of Melbourne

I bet Big W is really hurt by that review Paddy

Don’t you hate it when you can’t destroy the environment for free?

This store loses 1 star because one time they had a lazy cat.

Maybe the cat was pretending to be asleep to avoid Paddy. Sorry cat but you won’t be getting out of this Google review. 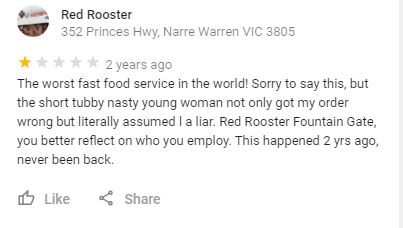 I’m so sorry to hear this Paddy. Thinking of you.

Paddy must be the most attractive man on the planet because he seems to be very judgemental of other peoples appearances. 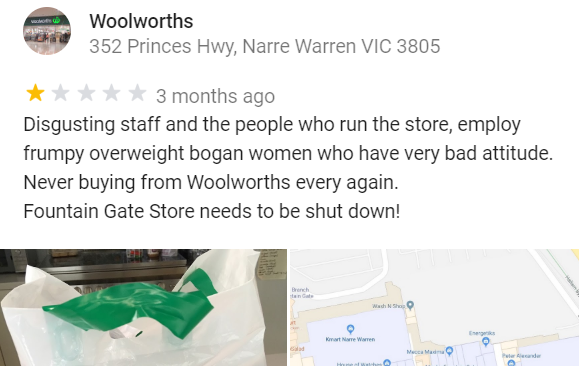 Maybe Woolies should get one of Paddy’s Ugly meters.

Don’t go to the Lions Op Shop. It will take you an hour to get there and you will get a $320 fine on the way home. It is all their fault 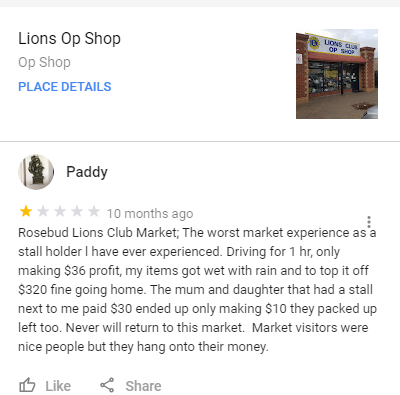 Paddy this is not their fault.

My complex calculations have determined that Paddy is posting reviews at an alarming rate of 1 every 2 days. I’m not sure if I have ever left a review so that is infinitely more than me. Maybe Paddy should get a blog instead.

Disclaimer: There is a chance this person has some kind of intellectual impairment and I wish him all the best. I just had a great time reading all of his reviews.

My Review of Paddy

It’s time to call out Influencers for promoting fad diets