I kept seeing photos of this medieval-looking place popping up on my Facebook feed. I thought: “This looks like old Europe, surely this can’t be in Victoria?” Intrigued, a quick Google search revealed that it is. Situated in the leafy Melbourne suburb of Eltham, to be more precise. Behold Montsalvat.

What is Montsalvat in Eltham? 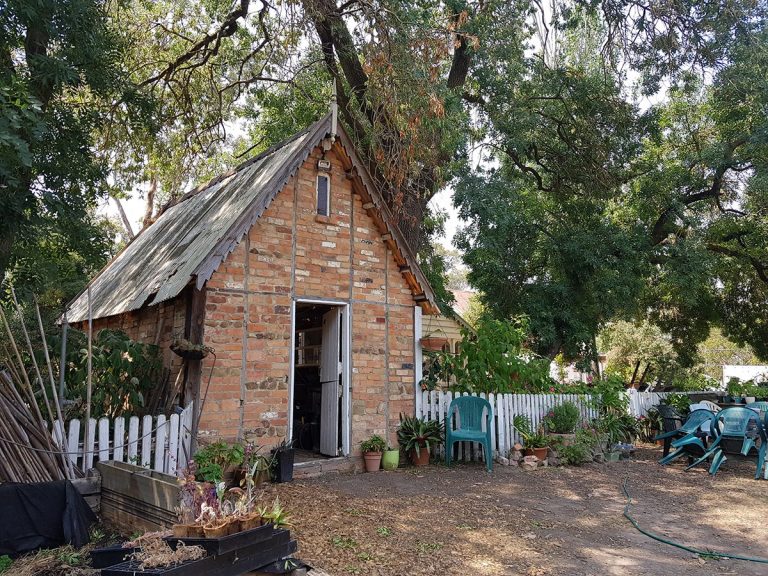 Montsalvat was founded in 1934 by architect-turned-artist Justus Jörgensen. After a tour of Europe as a successful artist, Justus – along with many of his artist friends and family – began construction on what is now one of the most unique attractions in Victoria.

Drawing inspiration from French provincial and gothic architecture, Justus and friends designed and oversaw the creation of a number of buildings. He and his community of artists lived and worked here, in their self-sustaining artists’ commune. Incredibly, all the buildings were constructed almost entirely from local materials. Various pieces were also salvaged from demolished buildings around Victoria.

Montsalvat is still a thriving community of artists and creatives. The venue encompasses various galleries, a chapel, a cafe and restaurant, performance and function spaces, produce gardens, and probably more that we didn’t even see. Let me tell you about our experience:

As soon as we drove up to the front gate, we were instantly taken by the rustic charm of the place. In parking the car, we passed what I think was an old steam-roller. It looked about 100 years old. While I had planned for us to have a nice lunch at resident eatery The Boulevard@Montsalvat, I hadn’t planned for it to be booked out (rookie mistake, I know). So after lunching elsewhere, we returned and paid the entry fee ($14 for adults, $10 concession).

Adjoining the Barn Gallery, is a smaller space called the Resident’s Gallery. Which is pretty self-explanatory. 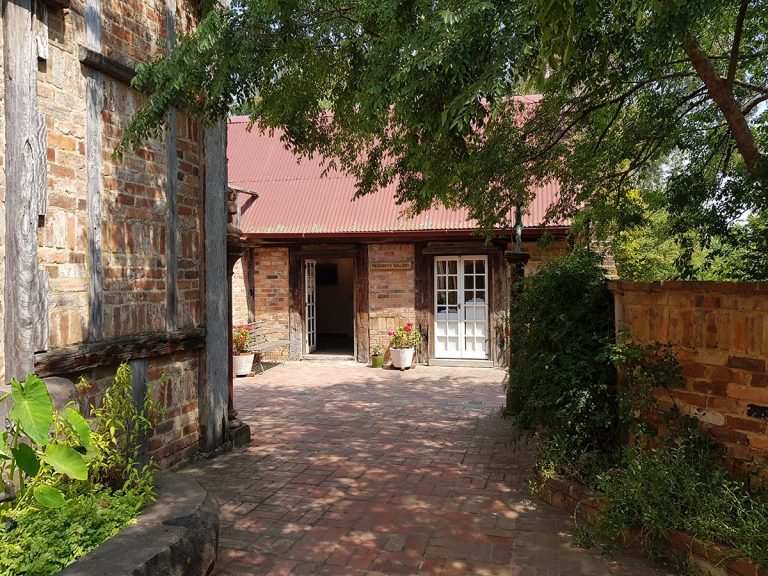 The Long Gallery is… also pretty self-explanatory. It is, as the name suggests, very long. Although the building itself keeps to the general French provincial setting, the overall vibe of the works here is a bit more contemporary. We found a number of sculptures and ceramic works running down the length of the room. The walls were lined with various 2-dimensional works.

The Upper Gallery is housed in the Great Hall. We saw a lot of historic artwork from the creators and original inhabitants of the commune. Which is really cool if you like history (like me). I didn’t get any pictures, but the impressive and grotesque sculptural work on the exhibit really made an impression. Speaking of grotesque, many of the gargoyles adorning the buildings were sculpted by early students of Montsalvat.

We wandered through the various stony alleyways, steep staircases and narrow passages that snake through the grounds. If you woke up drunk here, you might legitimately think you were in 18th century Paris. Considering they have a lot of weddings and other celebrations here, someone probably has at some point.

As you’d expect, the gardens are very well established. Dirt paths lined with wooden fences wind through the grassy hills of the estate, punctuated by the occasional sculpture. The trees span a variety of native and introduced species. Some of them are huge, towering over even the largest buildings.

It was a hot day, so we ducked inside the impressive bluestone chapel for some relief. 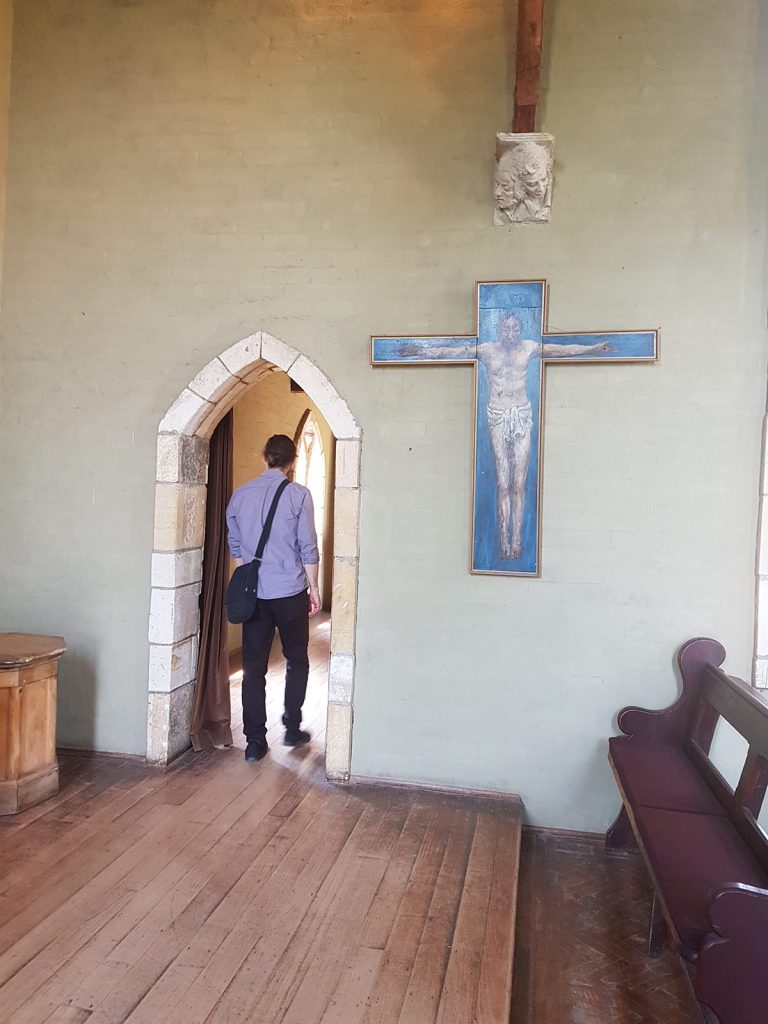 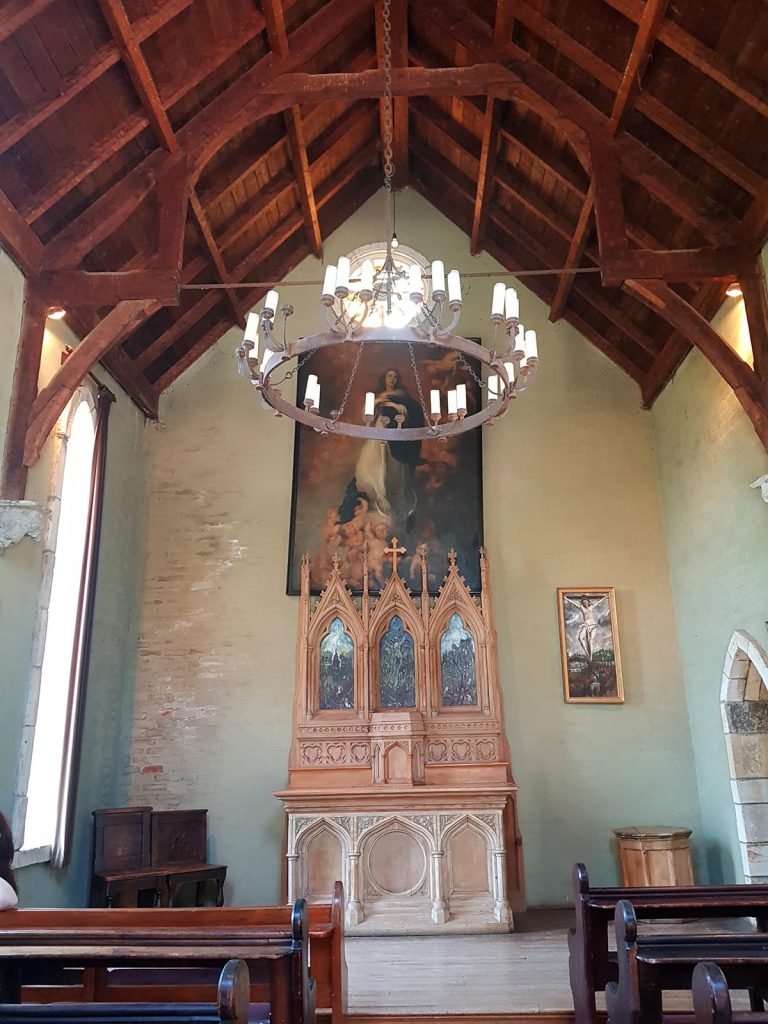 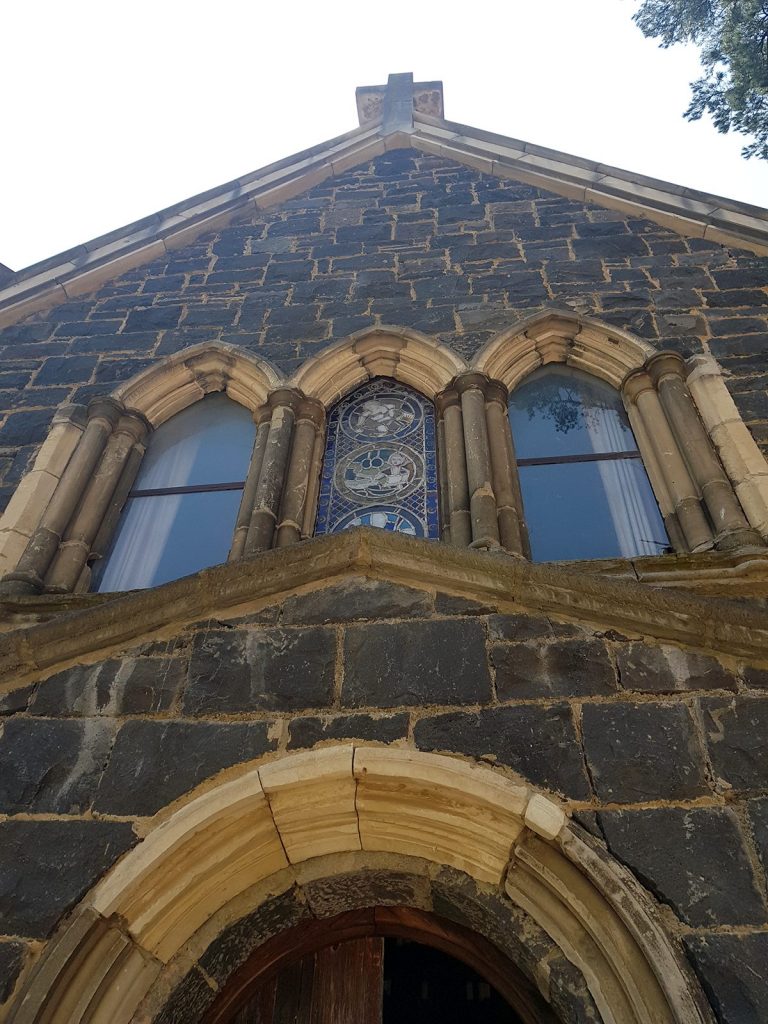 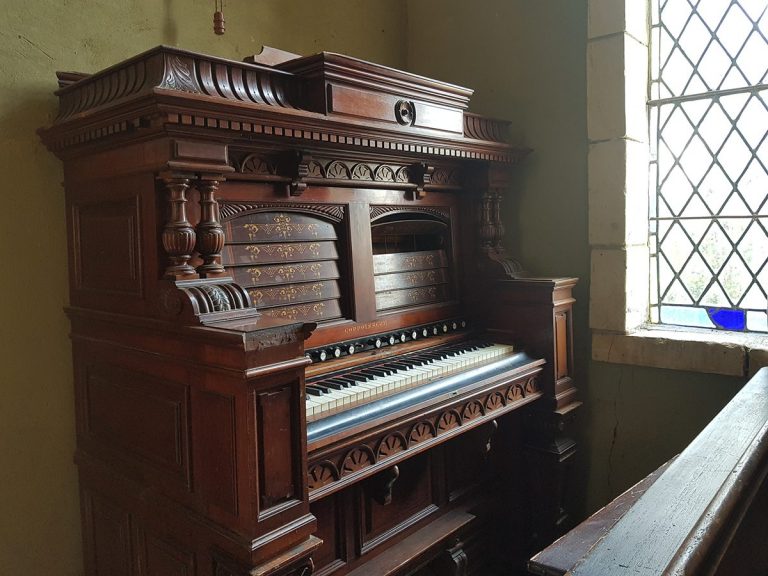 Also dotted around the 14-acre site are various cottage-y and fairytale-esque dwellings/studios/workshops. Here the resident artists live, work, and even hold classes. You’ll find everything from musical instrument artisans, potters, painters and other masters of their respective crafts. 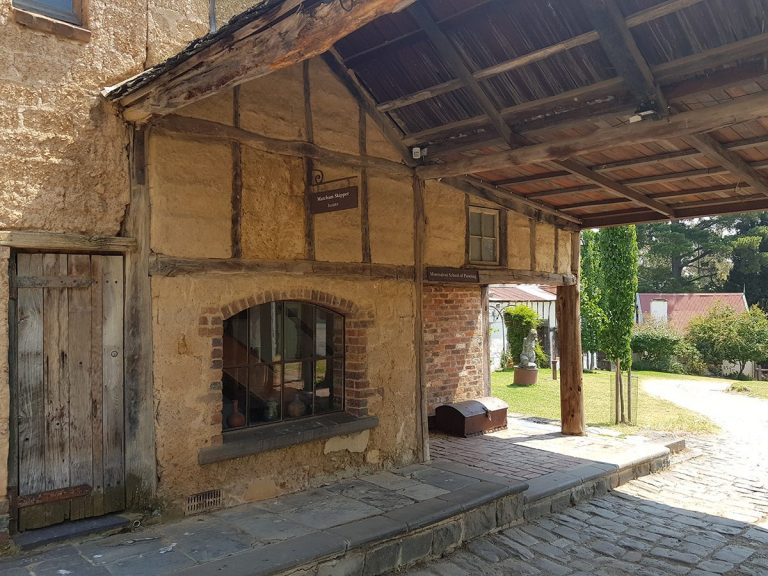 The aptly named Great Hall, with its ornate windows and balconies, is easily the most prominent structure within Montsalvat. Often the backdrop for weddings, film and photo shoots, it also houses the Upper Gallery and is generally just an awesome piece of replica France. Though it actually served as a stand-in for Portugal, in a Neighbours story arc. 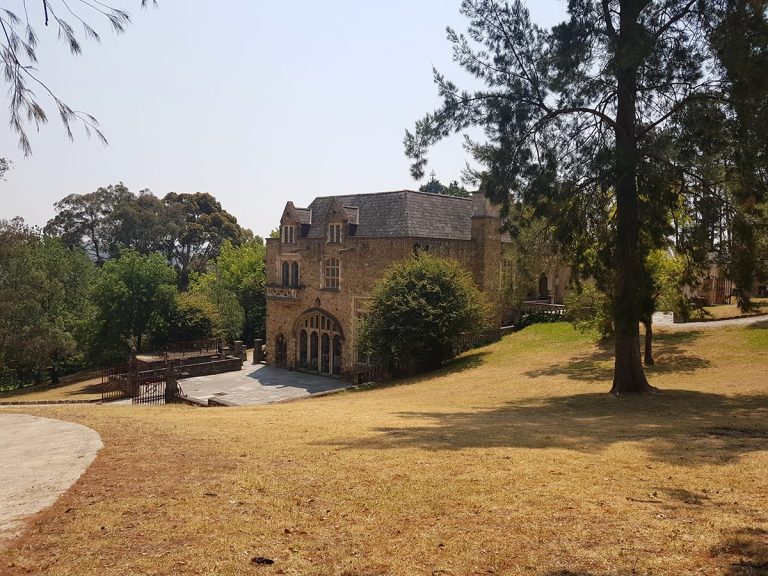 There was really only one major sticking point in the whole experience: The outdoor toilets near the Great Hall. On a 38 degree day, the ancient plumbing system does not do well to contain the smell. We could smell them from a bench overlooking the building — 100 metres away. Yikes.

During the second World War, Montsalvat was transformed into a farm and market garden. Today the residents still grow a lot of their own produce, tend to the gardens, and raise various farm birds. It’s a charming little slice of slow living. Amongst the rustic sheds and cottages, we had moments where we felt as if we’d stepped back in time. 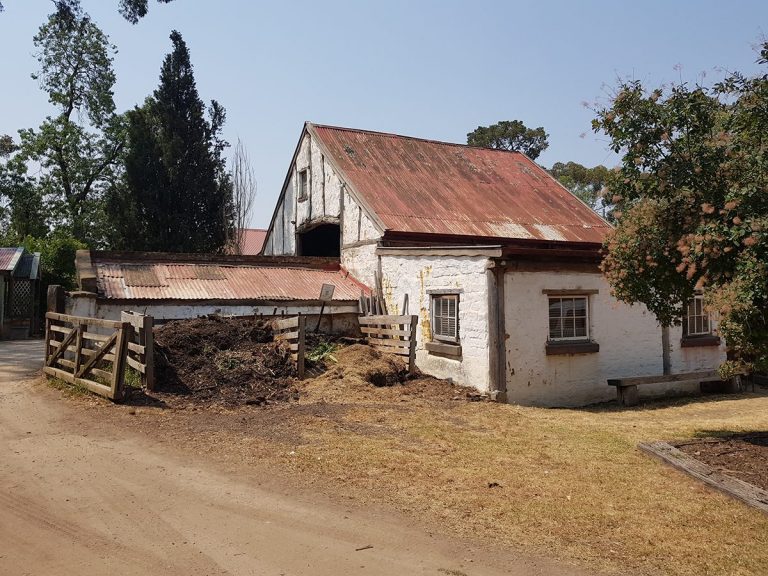 We awkwardly greeted some of the residents at work in the gardens, and soon came across some veggie patches full of young Silkie chickens (Emmy’s favourite). I wasn’t sure if they were supposed to be in there, but they were ADORABLE. LOOK: 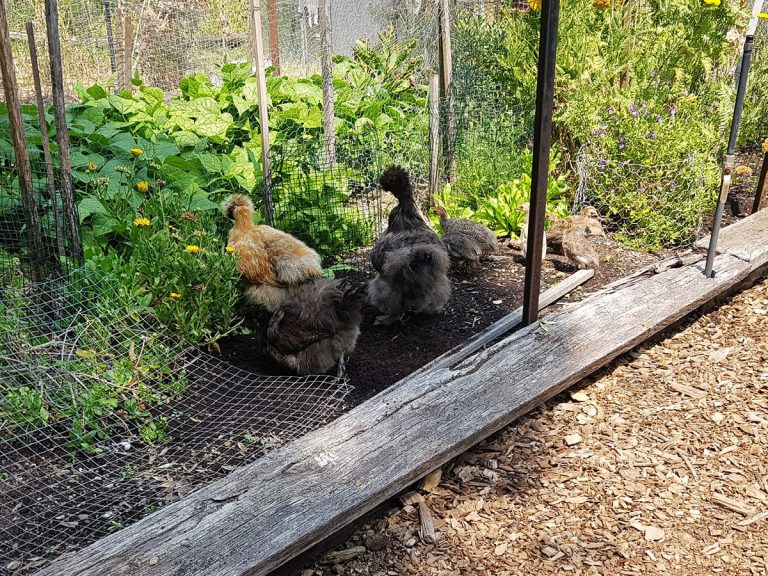 We also spotted an elusive peacock who was very reluctant to be photographed. Also, geese (Emmy’s least favourite). 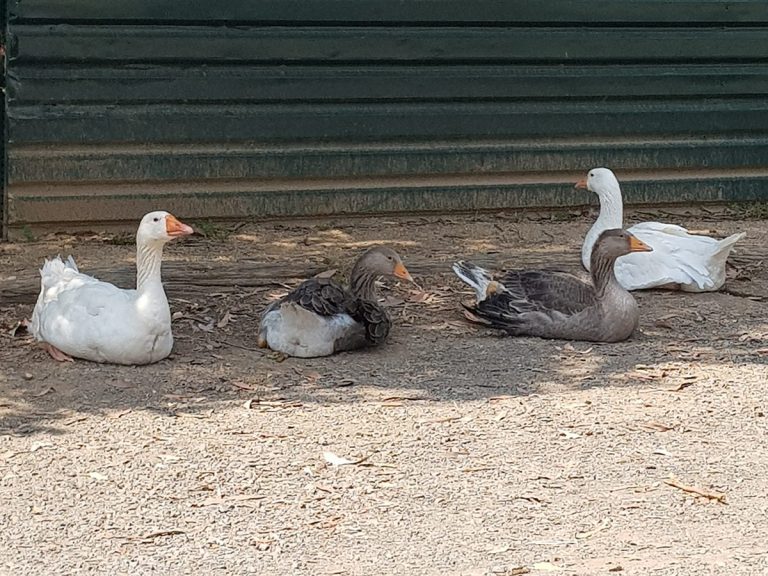 Montsalvat is something special. It’s a place of enormous historical and cultural significance and continues to celebrate the art and culture of modern times. It’s a place to relax, be inspired, learn, and appreciate the finer things in life.

The various spaces normally host concerts, exhibitions, festivals, and other events throughout the year. Unfortunately, the impact of COVID-19 has resulted in events being cancelled and reduced opening hours. If you’re allowed to go out at the moment, I highly recommend booking a visit. I’m generally pretty hesitant to make concrete statements, but I can guarantee a date at Montsalvat will be a memorable one.

All You Can Eat Korean BBQ Buffet Werribee...

What’s at Scienceworks In Melbourne In 2022 and...

The Best Zoos and Wildlife Parks in Victoria