If you haven’t yet availed yourself of the Rate My Plate Facebook page, you are royally missing out on some light-hearted fun.

It is a corner of the internet – also expanding into a sister Facebook group and subreddit by the same moniker – not just famed for the questionable dishes that users volunteer for judgement by a panel of peers, but also for scathing, often side-splitting commentary from a whopping 2.8 million followers the page has amassed to date.

I mentioned in my recent post My Giant Collection of Weird & Creepy Exchanges with Men on Facebook that I have an excess of spare time on my hands nowadays – time I sometimes spend on the site, consuming far too many memes and perusing posts and comment threads on some of my favourite pages, one of which is Rate My Plate.

Thus, I hereby declare this post an ode to some of the funniest content from its spotlight. Bon Appétit! 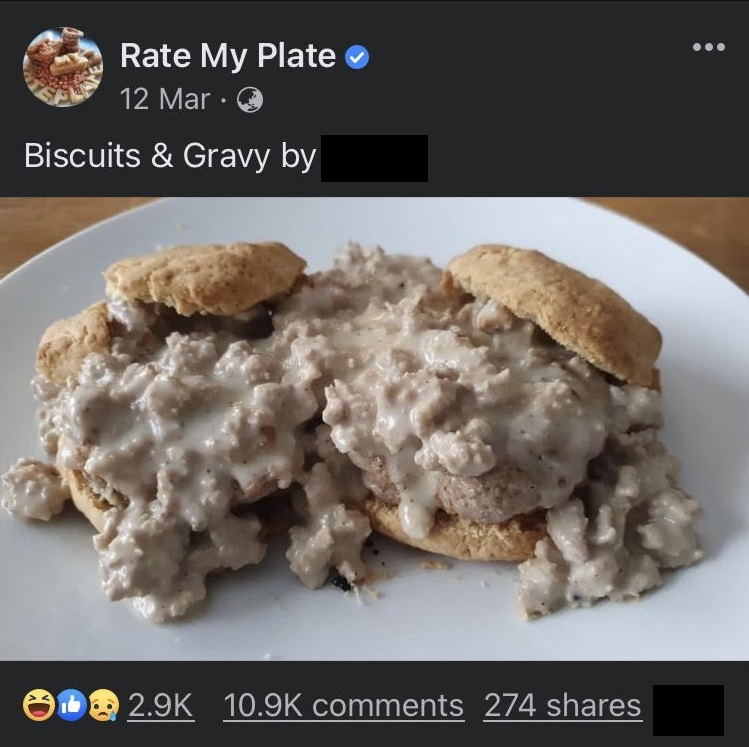 Under this post, my personal favourite out of all I’ve chosen to showcase, somebody said, “Gravy? Where? This looks like clotted cream that was forgotten in the fridge and has since expired…”

I think it looks a little like soy milk that has gone a bit tofu. Shudder.

Weetbix and baked beans? Not sure my gastric enzymes are prepared for that combination… 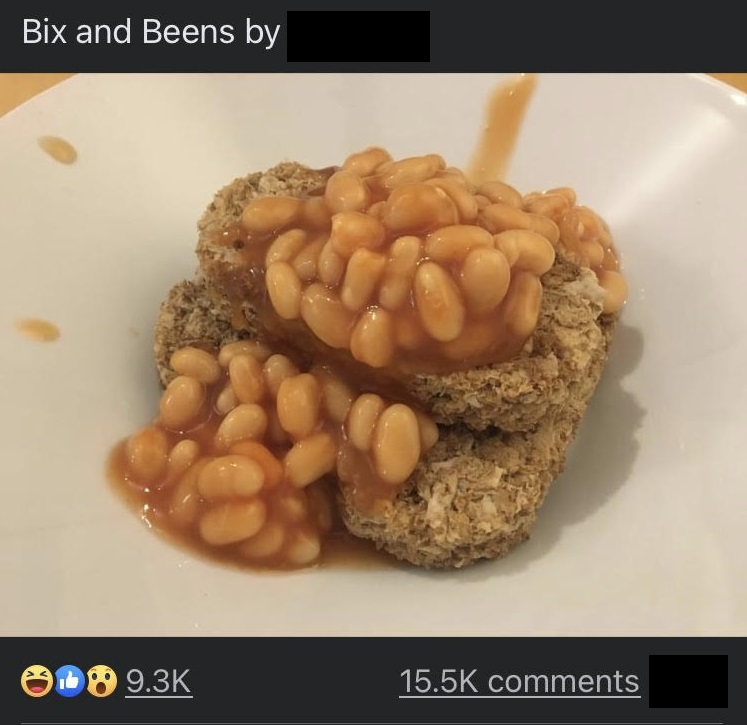 One of the top comments under this post read, “what in all things holy is that concoction! And after that much fibre and beans, do you have any shred of your colon left?” 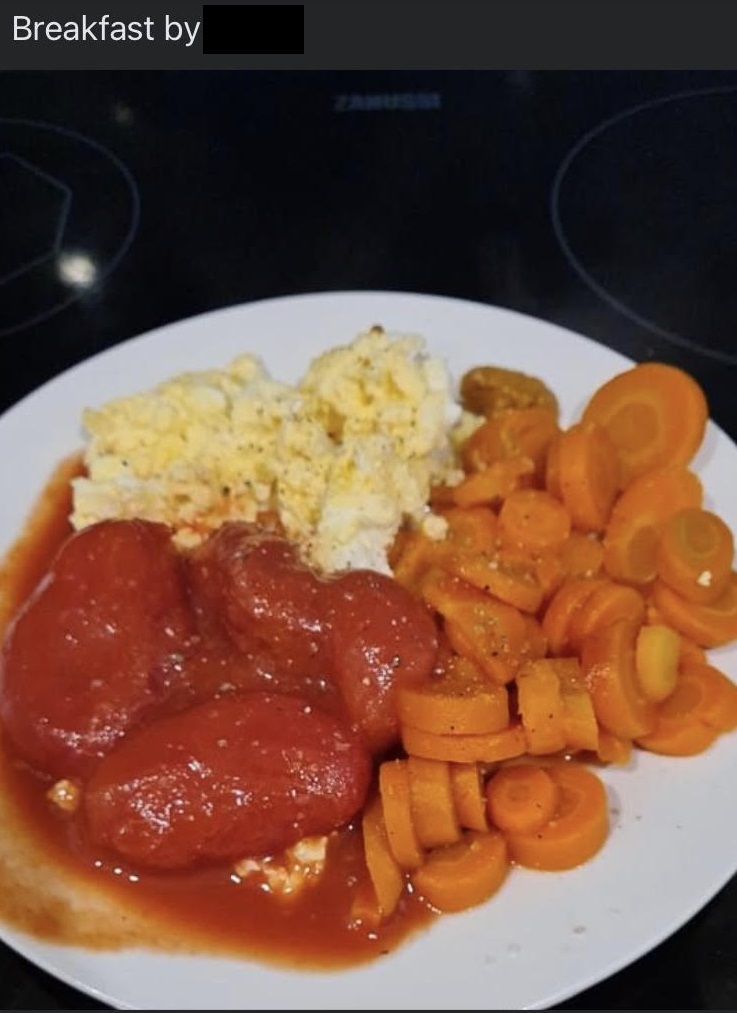 “What being single looks like, on a plate,” one commenter said, “tinned tomatoes, raw carrots for breakfast, and regurgitated eggs. I’d give it a miss personally.” 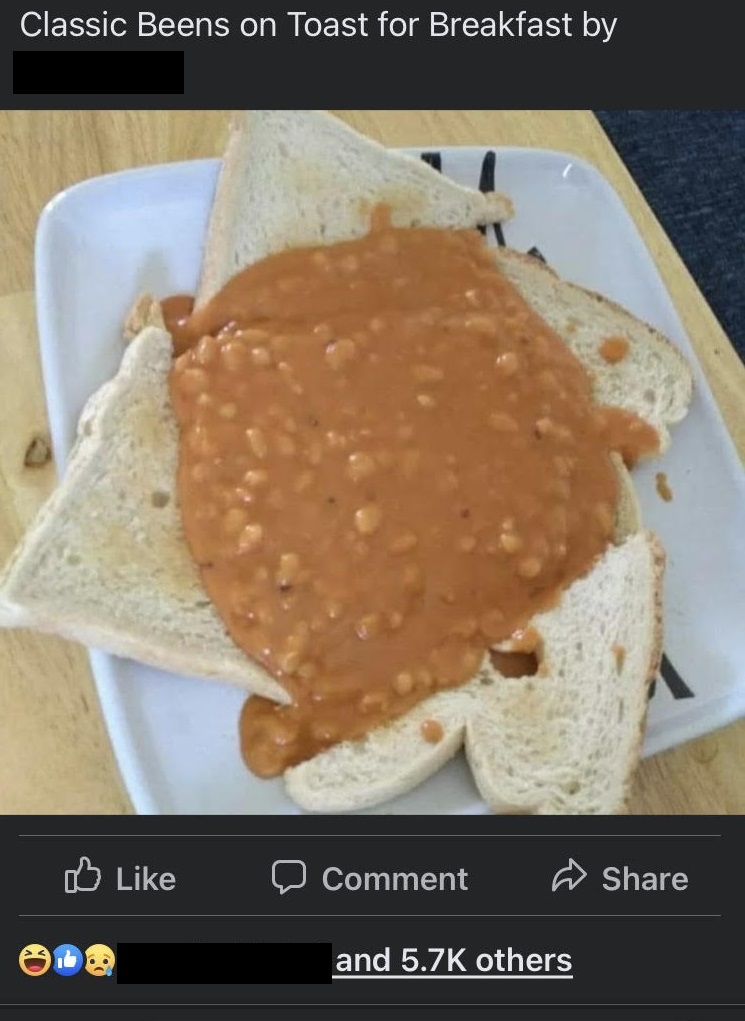 Iconic comment: “Cheap bread that has had a brief encounter with a cheaper toaster, covered in a slurry that looks like it has been sucked out of the second stomach of a ruminant. Not good, not good at all.”

Additionally, I liked this one: “I use either the hob or the microwave for heating beans in preference to a dog’s digestive tract. Also, you could ask your mother for instructions on how to operate a toaster.” 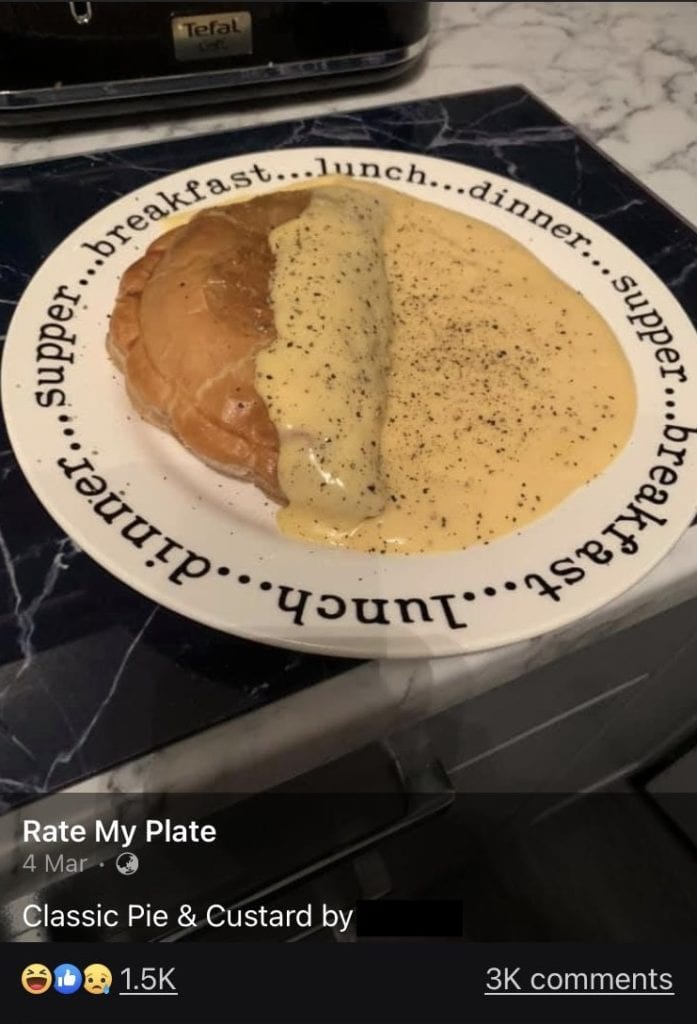 “Then Moses stretched out his hand over the custard sea,” one user referenced the Book of Exodus, “and the lord drove the custard back by a strong east wind all night and made the pie dry again.”

Somebody also remarked, “S’cuse me, can I just borrow your mother’s ashes to scatter over the custard?”

Not yet convinced that’s curry 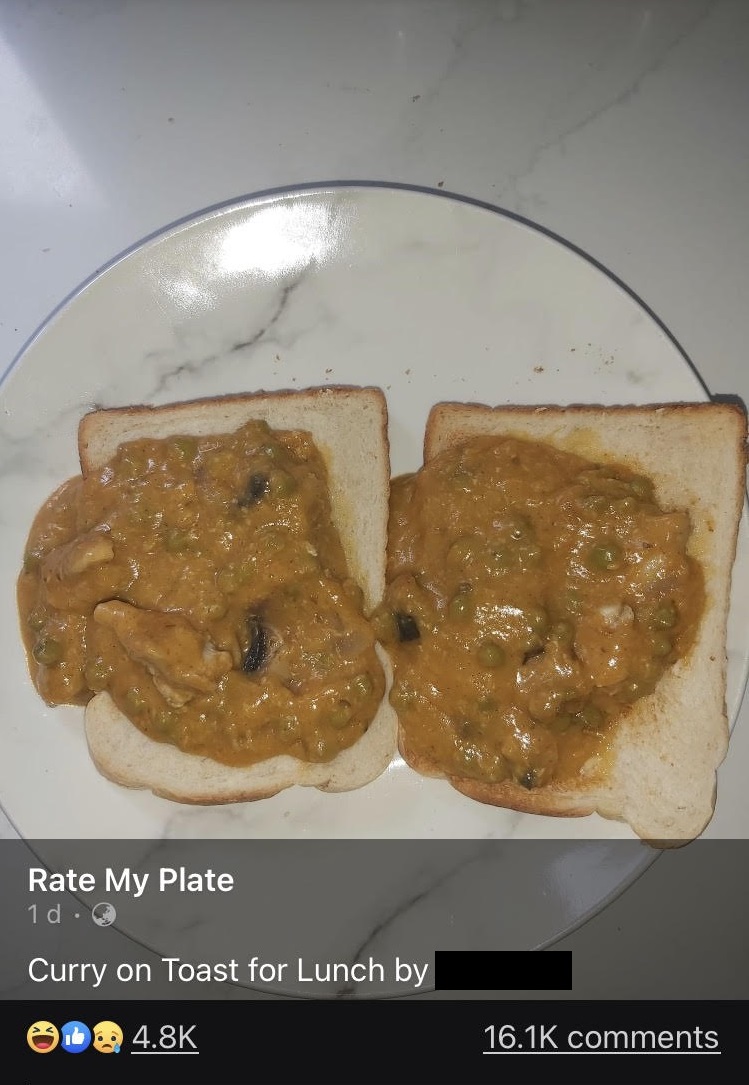 Commentary on this one included, “Dysentery on bread would be a more apt description.”
As well as, “Where do I start? Bread not toasted enough, looks like you’ve warmed it with a brake light from a 1980 Ford cortina.” Sounds weirdly specific but ok.

Oh no. Someone forgot to tell him you’re supposed to upload snaps before the meal exits your GI tract. Well, shit. 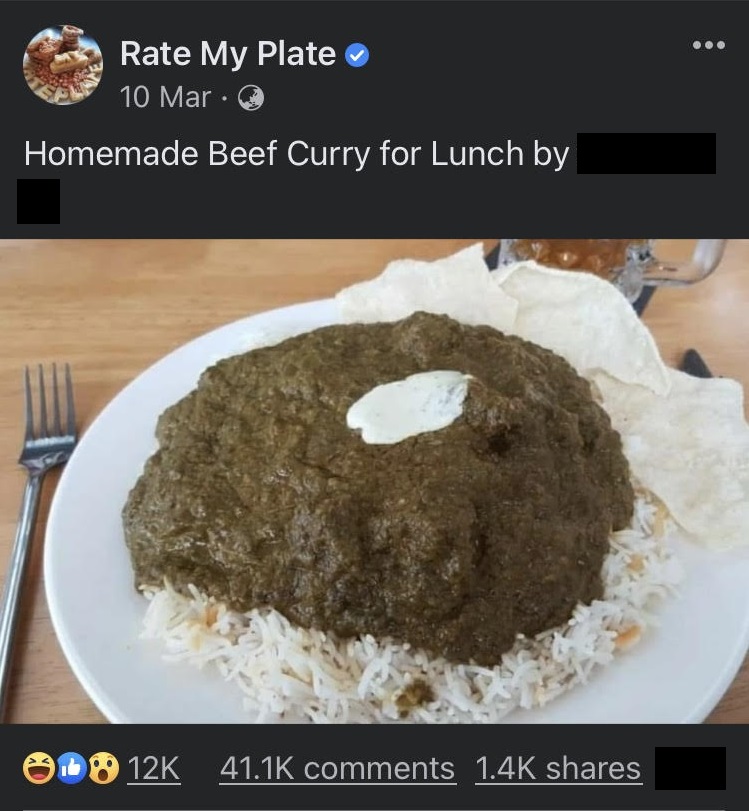 “It looks like the result of a meal that has been digested and passed through all 4 stomachs of a cow, laid on a bed of rice with seagull faeces for decoration.” Well, you can always depend on the followers to mention defecation somewhere in the comments thread of each post. Ah, a sense of uniformity is so important. 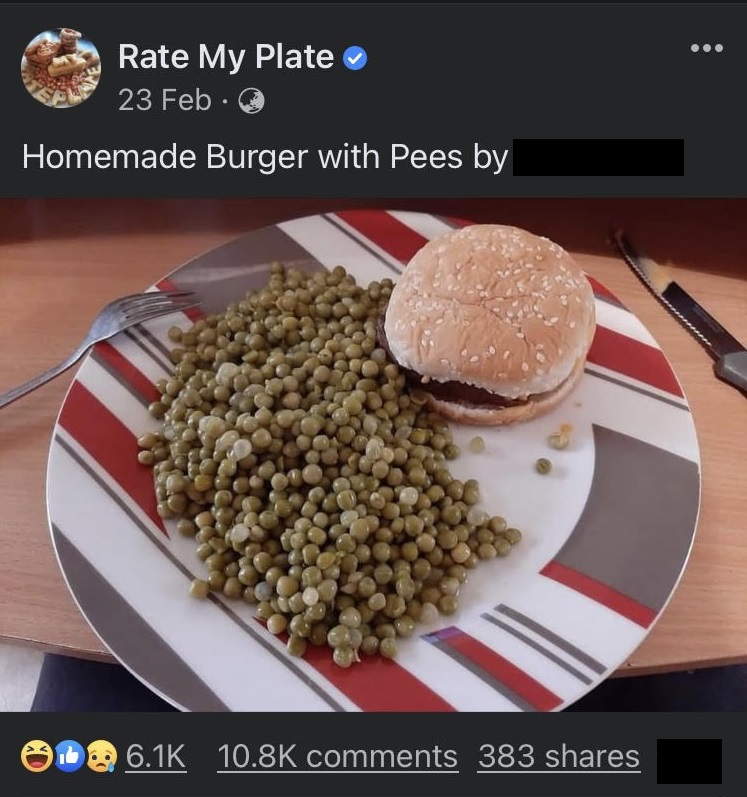 “Those peas look like you collected dried up frog spawn from the ponds,” read the top comment. I’m not going to lie, I agree… 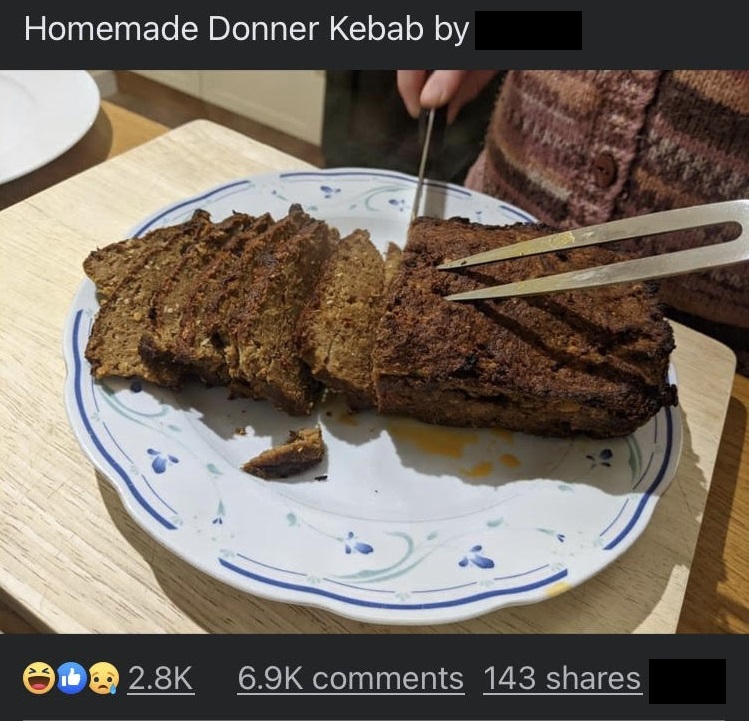 My favourite from the panel on this one went like this, “That must be the most unappetising excuse for meat I have ever seen. Even if I had 20 pints of lager and was craving a kebab, I would rather eat the one that someone couldn’t finish and left in the bin than eat that monstrosity. Can’t even see where it ends as it blends nicely with the colour of your cardigan.”

Holy hell. Somebody break out the aloe vera for that burn. 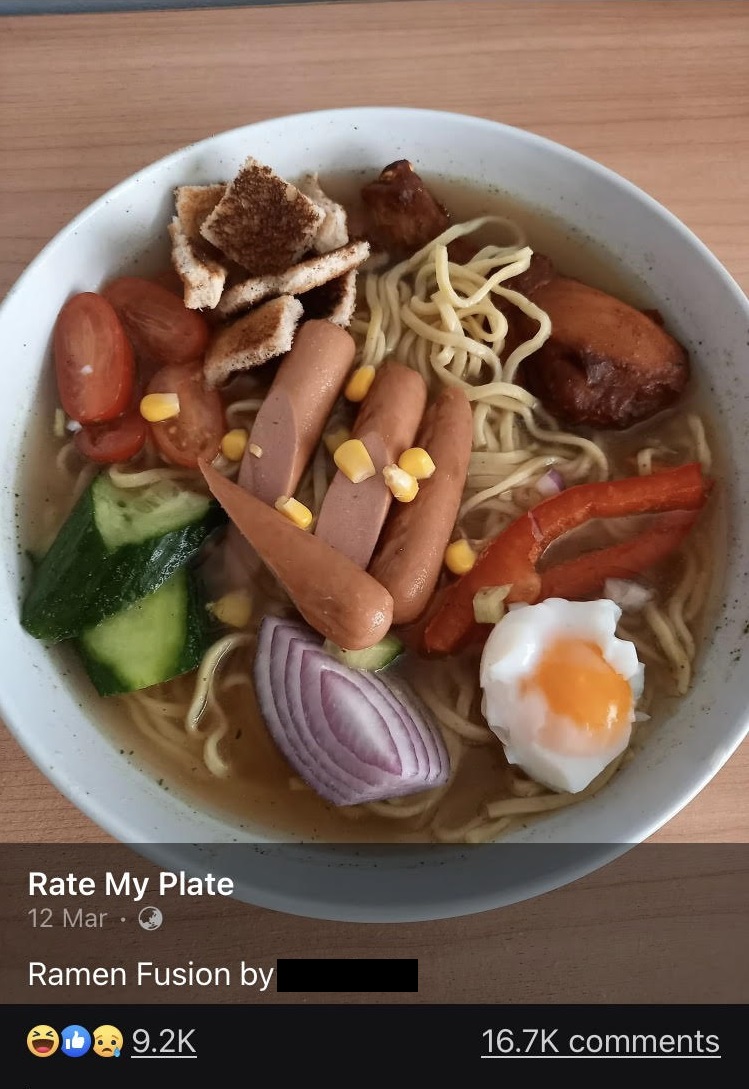 “Let’s chuck everything in the fridge into a bowl of bin juice?! Slicing up 15£ hotdogs like that doesn’t make them any less shite.”

Another comment I liked said, “Looks like the contents of my compost caddy. Just missing teabags and eggshells.”

Meat freshly cooked in the dishwasher by the look of it 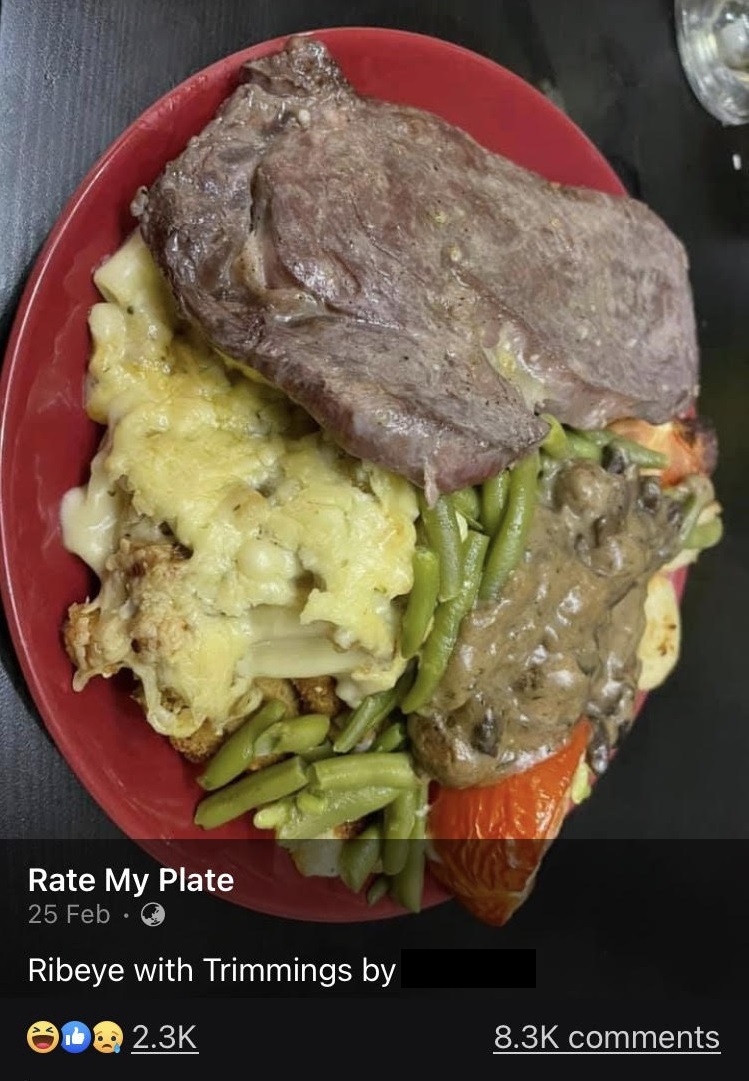 “That steak looks so depressed it needs 100mg of Sertraline instead of pepper sauce.”

I have to say, this particular post reminded me of an upload from YouTube extraordinaire, data analyst by profession and STEAM (Science, Technology, Engineering, Arts and Mathematics) advocate Louis Weisz.

Two months in the making, Louis finally resolves the question: can you cook a chicken via slapping it?

You can watch the video below, in which Louis also attempts cooking a steak solely by slapping it – and guess what? The result still looks more appetising than this ribeye. Also, is that half a blistered apple on the side there? Delicious. 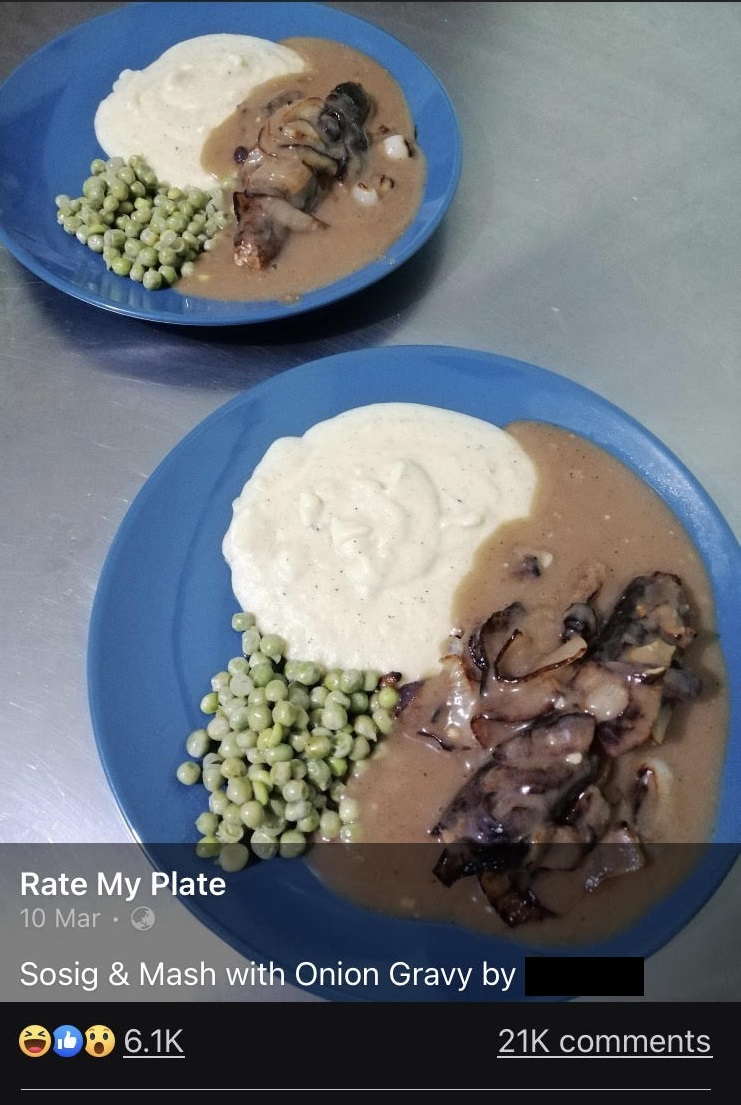 A member of the public commented, “I have quite bad Crohn’s [disease], and this looks like three regular stages of my bowel movements in all honesty. Mmm, tasty…”

Another said this of the sad-looking meal, “Peas look like they were boiled by Bridget Jones, the gravy looks straight from KFC, onions black. And as for the mash, my own pre-ejaculate looks more appetising. Sausage looks good though.”

Also, reading “sosig” triggers a reaction within me that, rudely, brings this classic to the fore of my mind: 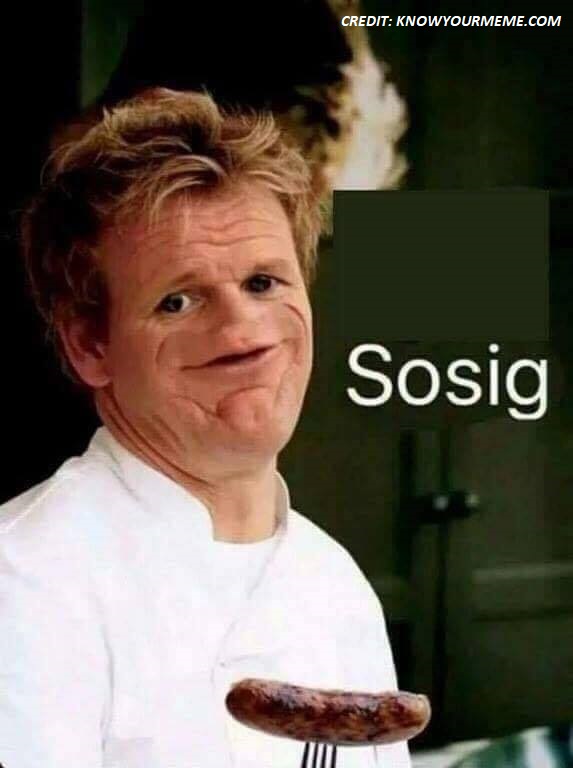 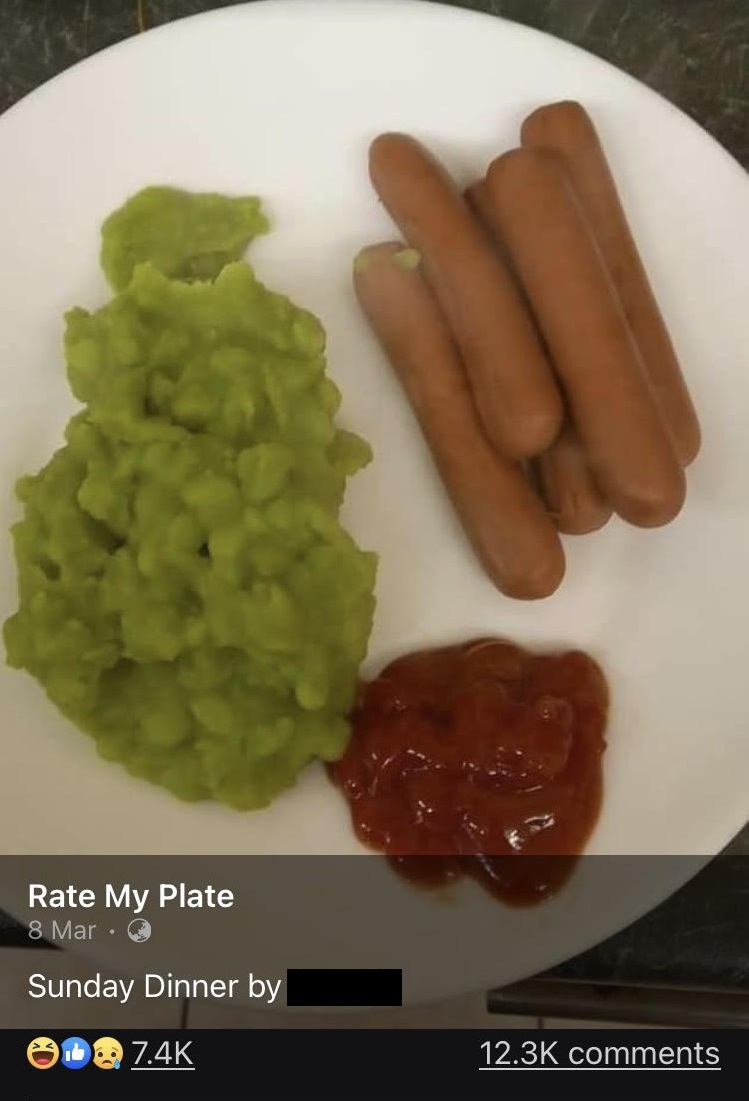 “I just spoke with Sunday and it says you can stick your dinner presumably where most of it originated from.

And this – my favourite: “Looks like a surgeon’s tray after he’s finished removing the dead tissue and infection. Take some broad-spectrum antibiotics.” I don’t know about you, readers, but the thought of necrosis of the flesh and entrails is my go-to appetite stimuli. 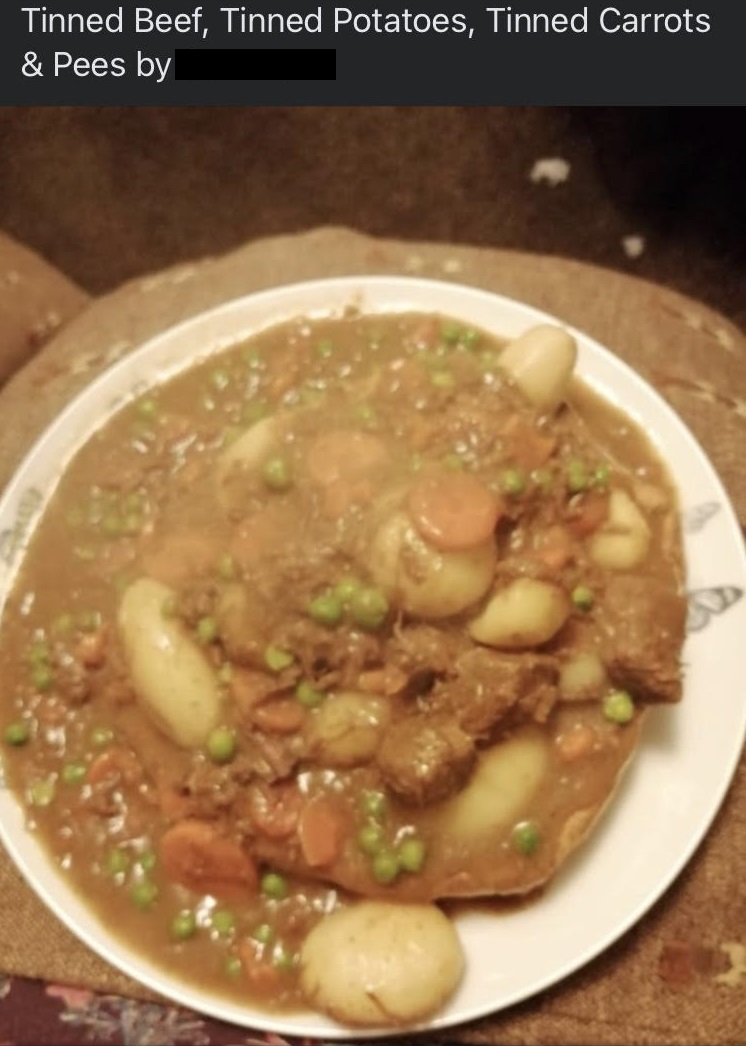 Anything else you’d like from the tinned section at Coles, love? My favourite comment under this one was, “this is what it looks like when my dog pukes after eating my puke,” under which someone added that this could be the new Bristol Stool Chart.

Honourable mention: “This has gotta be in my top tinned meals. If I had a dog, which I don’t, he’d turn this tinned shite down. It looks like human intestines in cowpat – oh, with carrots.” 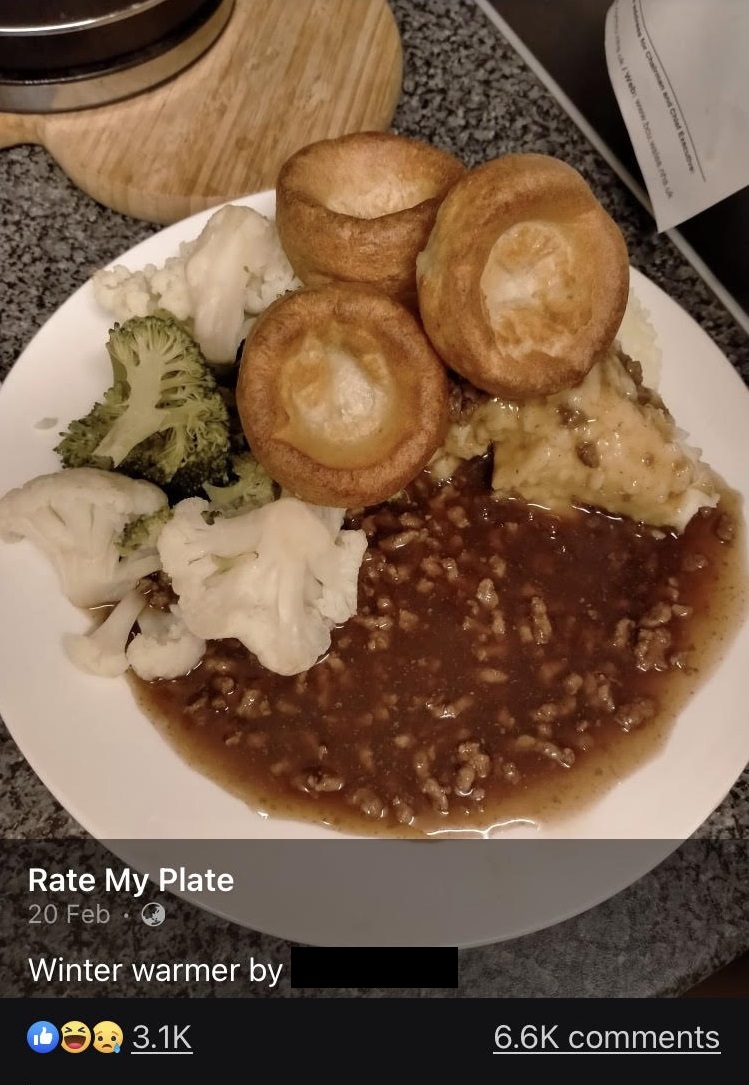 Of the broccoli and cauliflower, one commenter said, “That veg is ghostly.” I have to agree – over-boiling those from the cruciferous family is usually conducive to a plate of the highest pallor. My girl Morticia wouldn’t even hazard eating this.

Other feedback included, “maggots swimming in a vat of piss,” “I had a bad dose of the Winter Warmers last night too – but that was the mutton vindaloo and 12 strawberry daiquiris,” and “reminds me I’ve gotta worm the dogs.”

I personally think that brown slosh looks like the contents of a colostomy bag, but maybe that’s just me.

If you’d like to join in on the fun, you can visit the Rate My Plate Facebook page here.

Hi, my name is Hayley. I live in Melbourne, I'm chronically ill, chronically bisexual, and chronically sarcastic. When not posting brain-rot on Facebook, I'm your resident goth and future veterinarian here at Melbourne Girl Stuff.

Places To Go In and around Melbourne With Kids

Best Christmas Gifts For Her That Will Make...

Over 26 of The Best Educational Kids Shows...